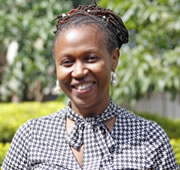 Tina is the Executive Directo for Center for Domestic Violence Prevention (CEDOVIP). She holds an MA in Sociology from Makerere University. Under her guidance, CEDOVIP won the 2010 UNAIDS Red Ribbon Award for innovative work in preventing violence against women and HIV and also successfully piloted the SASA! Programing in Kampala that was the site of the ground breaking SASA! study that brought to light evidence that preventing violence against women through social norm change is possible.

Tina has several years of experience working with communities, police, civil society, justice law and order sector and policy makers to prevent violence against women. She oversees CEDOVIP's violence against women prevention work. She led a team of CEDOVIP’s colleagues to develop a police handbook as standardized protocol for handling cases of domestic violence for the Uganda Police Force, and the development of the Uganda Police Force module on gender based violence for the Police training curriculum. Provided leadership for advocating for legislations on violence against women i.e engaged in policy formulation at a local level (influenced the enactment of the first ever Domestic Violence bylaw in Uganda for Kawempe Division) and effectively participated in the drafting of the Domestic Violence Bill and spearheaded the Domestic Violence Bill coalition’s successful advocacy process for the Domestic Violence Act with civil society, policy makers, media and grassroots communities. Tina has worked with diverse stakeholders, including bilateral donor agencies, UN agencies, international and national NGOs, national consultants and leading academic institutions.

Tina is a Member of the Independent Advisory Board of the What Works to Prevent Violence DFID-UK Global programme and Member of the Leadership Council for Global Women’s Institute at George Washington University, an international and eminent group of diverse leaders and scholars connected by their commitment to advance women’s equality through research, education, policy and effective community program.